I believe I mentioned several posts ago that I’m working on some Rapunzel dolls for certain family members.  Whenever I visit, they ask if I brought the dolls I made ages (fine, months) ago.  It feels wrong, somehow, to give away prototypes, and I need to type up the patterns, anyway.  This means I need to make the dolls over again to make sure there’s nothing drastically wrong with the notes.  For example…. 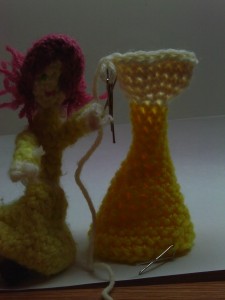 My lighting wasn’t very good, but you get the picture.  (Literally.  😉)  With the old doll for comparison, it’s pretty clear that New Rapunzel’s head is way too big.  When writing out the pattern, I’d forgotten to write something down.  Bad idea…. 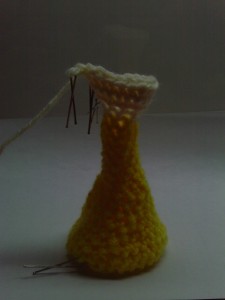 It’s a little tricky to catch – all I did was throw in a decrease row before switching ending the yellow part.  Amazing what a change that makes – New Rapunzel’s head is no longer oversized.

And the result?  Drumroll, please…. 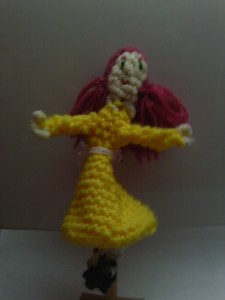 I think I like it even better than the one I’m keeping.  The eyes are a little off, and I think one of the legs was sewed on slightly off-center – but I really like the eyebrows, the way the face didn’t end up scrunched, and the longer hair.  Especially the eyebrows and the way you can actually see her face.  Too bad said niece and nephew would notice if they got the old one and I kept the new one….  😉

Maybe, if I have loads of extra time (which is highly unlikely at the moment, but you never know….) I can even make New Brute.  Of course, he’d be nearly the same age as Prototype Brute, but don’t tell them.  You’ll hurt their feelings.

This site uses Akismet to reduce spam. Learn how your comment data is processed.